Some say Vermont’s Northeast Kingdom was born out of sheer stubbornness.

It is gorgeous and mysterious, with a uniquely Vermont ability to endure just about anything, which is a handy thing, since until only about 13,500 years ago, most of it was encased under sheets of ice a solid mile thick.

With its far northeast climate, harsh winter weather led to the driest of skin conditions. As you might guess from such an environment, the treasure of the Northeast Kingdom isn’t gold or silver, it’s an authentic skin-saving formula called Bag Balm.

From Farm To Fame

In 1899, rumors flew around the Northeast Kingdom about a miraculous salve for chafed and cracked cow udders concocted by a pharmacist in Wells River. So one fateful morning in 1900, a Lyndonville farmer named John L. Norris saddled his best horse and rode 30 long miles to find out what the fuss was about.

The minute he tried it on the first cow, John Norris knew what he had to do. He scraped up every penny he could lay his rough hands on to buy the formula and all the rights to market it.

Bag Balm officially set down roots after John hired a product designer to create the distinctive green tin with a cow’s head and Vermont’s indigenous red clover on the cover. The legend was born, and it was too big to stay in the barn.

Old locals still talk about how Bag Balm saved everybody’s hide in the winter of 1933, when the temperature fell to 50 below zero. In 1937, Admiral Richard Byrd took Bag Balm to the North Pole. During World War II, soldiers used it on their rifles to keep them in shape. After the Twin Towers in New York fell on 9-11, Vermont's Original quietly provided Bag Balm to be massaged into the scratched paws of search dogs, who relentlessly roamed over mountains of rubble looking for survivors.

And that’s how Bag Balm became a tried and true staple of every home, ready to moisturize every callus, cut, new tattoo, chafed foot or heel, cracked lip, or patch of dry winter skin of every member of the household - right down to the sore paw pads of the family dog.

Bag Balm is an incredibly versatile, long-lasting moisturizer, with only 4 simple ingredients. And it’s been working hard to repair skin since 1899.

After 115 years, Bag Balm continues to spread – from farm to city, ski lodge to day spa, beauty editor to Instagram starlet, to college triathlete and beyond. When your skin needs a moisturizer like no other, Vermont’s hardworking Bag Balm is there.

Everywhere skin needs more than what your average dime-store moisturizer can give it, there’s Bag Balm. The legendary rescue balm born on the farms of Vermont’s rugged Northeast Kingdom. Bag Balm Works Wonders. 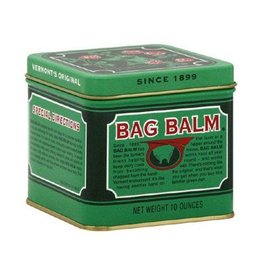