The Buddy Belt concept started in the summer of 1997, when Buddy, a miniature Dachshund came into my life. Buddy was just over a year old at the time and was soon to become the star of and inspiration for BUDDY BELT.

Each time Buddy went walking, he would gag and cough. This made me realize that he needed something other than a neck collar. The harnesses available were difficult to use and did not always protect the neck.  I then made the first Buddy Belt prototype using a piece of tire rubber. I took the prototypes to two different leather-workers to create a more refined form. After working with a leather designer for a day, I learned how to create patterns and templates specifically for leather. Next, I invested in tools, equipment and materials needed to create my own harnesses.

The result of this endeavor was the creation of a harness that was easy to use and that reduced the stress on the neck. Essential to the design is a single buckle, like a traditional collar, except that this design is fastened between the shoulder blades instead of around the neck. The animal’s front legs extended through the two holes underneath.

BUDDY BELT was officially launched at PET Expo in Toronto, Canada in October of 2001. In the spring of 2003, production moved from the home-basement enterprise to a factory space in downtown Toronto. A clicker-die press, industrial sewing machine, many other tools, equipment and leather were moved to this location. On April 17, 2003, Buddy Belts were being cut by machine. Other than the cutting and sewing process, each Buddy Belt is completely handcrafted. Since then, multiples of thousands of Buddy Belts have been cut, sewn and assembled. This number keeps multiplying exponentially, as do sales.

BUDDY BELT was well received from the start and continues to be a product in demand. The Buddy Belt has come a long way from the hand-cut flimsy versions of early days to the high-quality, premium product that it is today. Buddy is a senior now. He continues to happily wear a Buddy Belt wherever he goes. His own personal Buddy Belt collection keeps growing.

The quality of the product is the result of continued efforts to make it the best. Class Art Productions Inc, makers of BUDDY BELT, strives for 100% customer satisfaction. Buddy Belts are available in a rainbow of colours to fit dogs sized teacup, toy and standard. Other accessories include: matching ID collars, leashes, couplers and liners.

BUDDY BELT has enhanced the lives of thousands of dogs and their owners. In many cases, it has actually saved lives 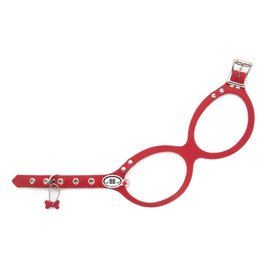