The Hurraw project started back in 2003. At the time, the founder Cyril Lemyre was importing pet accessories into Canada. One of his customers gave him a book called Food Pets Die For, by Ann Martin. The author was describing in details how the pet food industry actually works, and explained that the nice ingredients we see in the ads and on the packaging are not representative of the actual ingredients used. After checking out the book’s references, Cyril Lemyre decided to conduct an experiment : making a pet food in which 100% of the ingredients are accepted for human consumption. If what was written in the book was true, then such a food would provide obvious health results on the dog.

To balance his first recipe, he enlisted the help of a nutritionist working at Parc Safari, one of the well known zoos in Québec, Canada. He proceeded to make a first batch of food to test on one of his friend’s dog who had severe allergy problems. The dog was eating his paws, had lost about half his coat, had red spots all over the skin, was having repeated ear infections, and was on cortisone from the vet for the rest of his life. After eight weeks on the food, all the fur had grown back, the red spots had disappeared, the ear infections were gone, and so was the cortisone.

To validate this was not an isolated incident, Cyril Lemyre spent a weekend at the biggest flea market in the Greater Montreal area to find as many dog owners as possible who had health issues with their dog. After eight weeks on the food, every single dog that had issues had seen them disappear. After those overwhelming results, Cyril Lemyre left the accessory business to get into pet food manufacturing. Two conditions had to be met : make a food in which 100% of the ingredients are accepted for human consumption, and make it in such a way that preserves the original nutrients instead of destroying them. Dehydrated Raw Pet Food was born. 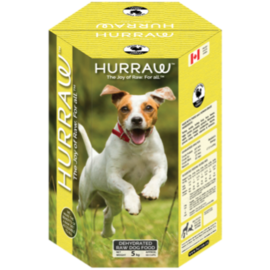